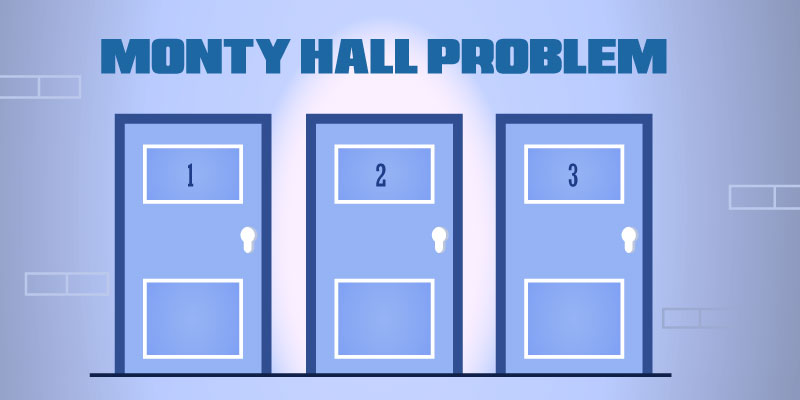 Monty Hall game was a popular game show in the 1970s.
Originally, the game win/loss was thought to be based on luck. So, it caused controversy when a Mathematician tried to solve the game using Math. Using basic probability she was able to help the player in making the right choice increasing the winning odds in their favor. As you will see, the probability didn’t really fit intuitively.

This article exists in an attempt to answer the below question.

How may times one has to play the game to ensure that the player wins at-least 2/3 of the times?

How is the game played?

The game begins with 3 doors. Let’s say doors A, B, C. One of these 3 doors has a prize behind it. Others have something or nothing. For example, other doors might have a goat behind them or it could be empty.

Let’s see what the probability looks like at each step.

This is such non-intuitive thinking that even after knowing the answer, it doesn’t “feel” right. Going back to our Mathematician friend, she posted an article in a newspaper claiming that the player should always switch when given the choice since that door has a winning probability of 2/3. Naturally, it became a controversy even among Mathematicians :-).

To learn more about the game, here is the Wikipedia link https://en.wikipedia.org/wiki/Monty_Hall_problem

If you are still unable to wrap your head around it, you are not alone.  While discussing this problem with my brother, he had a question that got me curious.

How may times one has to play the game to ensure that the player wins at-least 2/3 of the times?

This is a common question that arises whenever we talk about probability. Let’s consider another example for clarity.

Given a coin, the chance of getting heads or tails is 50-50. Does it mean, that if I toss the coin 4 times, I can be certain that I will get 2 heads and 2 tails?

The answer is of course NO. Sometimes, you might get 4 heads or 4 tails in a row. You cannot be certain. Don’t take my word, try it.

So, what is the magic number of iterations (games) one should play to ensure 2/3 chance of winning in this game of choices?

My initial intuition was it’s got to be in 10,000 ranges. Since we now know our intuition can be widely off, I decide to create a simulation of the game and run it.

A single execution of the simulation works like this.

After running this simulation a dozen times, I found the following.

My original intuition of running it 10,000 times was wrong.

*Based on our simulation

Here is the link to the simulation that I published. Feel free to play with it. Click on the chart to see the probability at any given iteration time. Full Demo Here